Some of the shelters are newly built in order to host hikers. These are small solid wooden buildings with well arranged interior - sleeping place, heater and cooking stuff (pots, cups, etc.). Latrine is a real luxury there :) However, there are also many chalets which are former shepherds' huts modified for tourism purposes. Some were solidly renovated, the others are in poor condition.

Most of the chalets are free of charge. After spending a night in such a place we are obliged to leave it in the previous condition. What does it mean in practice? Clean up after yourself, take your garbage, keep the latrine clean (if one exists) or chopp the wooace for the fireple. In fact, it is very important to comply with these rules in every place ;)

Most chalets have access to the fresh water but you should not expected the tap and sink inside ;) It means that there is a spring near the cottage. Sometimes the sign shows the way to the spring, however in most cases we have to rely on a good map with marked waters. Some shelters are located in a considerable distance from the water (even several kilometers) or the closest springs are seasonal – be prepared for that.

Planning accommodation in a particular shelter check if the place is open to public. A part of the huts is under the supervision of some tourism organizations which hold the keys to the buildings. You need to get the key before you set off on the trail.

Hiking with an overnight in mountain huts is a great adventure. Sleeping in simple conditions (sometimes being squeezed like sardines in a can), chopping wood, drying wet clothes on the strings stretched inside, shared cooking and finally a conversation with casual roommates have unforgetable charm :) 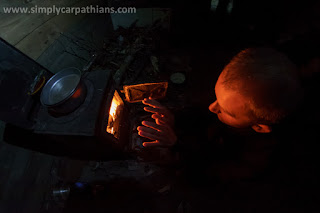 Events of the last few nights inspired me to write this article. It turned out that not only I did not sleep at night - somebody else was awake too. What is more – he was extremly active. Just below our window a stag was walking and roaring loudly. These sounds were not addressed to me but to the potential partner which he was looking for. The roaring did not frightened me because I already had the opportunity to hear similar sounds during mountain hiking – it is called the deer rut.

The rutting period we name the deers mating season in which the males (stags) are trying to entice females (hinds). The stags usually hidden in the forest become noisy and visible. They start calling hinds with the bass roar which can be heard from a distance of several kilometers. The more good-looking male the greater chance of gathering a group of admirers he has.

Often it comes to a confrontation between two stags. Sometimes they only compete for voices, but from time to time it happens that the males decide to fight and attack themselves with antlers. It is a real treat to observe the fight! Hearing a crack of clashing antlers is also very exciting.

The mating season is very exhausting for deers. Stags behave as if the world did not exist, having only one goal - to find a partner. They forget about eating and lose many kilos during searches and combats. Unfortunately, deers become easy targets for the poachers at that time.

When to listen the deer rut? The mating season takes place from mid-September to mid-October. The deers are most active at night, from dusk to dawn. Their roar can be heard also during the day.

Where to observe the rut? In the Polish Tatras stags often choose the clearings in Kondratowa and Tomanowa valleys. Roaring deers can also be heard in many other places. The first rut I had the opportunity to hear was in the Bieszczady Mountains - I had an impression that deers roar echoed the entire area. The deer I mentioned at the beginning approached the window of our house in the Silesian Beskid. As you can see there is no rule, deers choose wild places in the national parks as well as those which are close to human settlements.

At the end I will tell a story - this situation happened to our friend from the mountain rescue:

[Phone ringing at the office of mountain rescue]
- Hello?
- Good morning. My friend and I have a problem. We are sitting on a tree and next to us the bear is roaring. What shall we do?
- Are you sure that this is a bear?
- Yes!
- Do you see it?
- No, we hear the roars.
The rescuer is looking for recordings of a roaring animal and releases them to the panicked tourists.
- Is that how it roars?
- Yes, just like that!
- It's not a deer but a bear. Don't worry, come down from the tree and continue hiking.

Gubalowka - one of the most interesting view points of the Tatras, easily accessible and therefore, unfortunately, often very crowded. Many tourists ascend the peak using the funicular and go for souvenir shopping or to find restaurant to satisfy hunger. However, I would to write about different Gubalowka - interesting objects in the vicinity of the summit and what you can see from the top because the panorama is one of the best views of the Tatras. 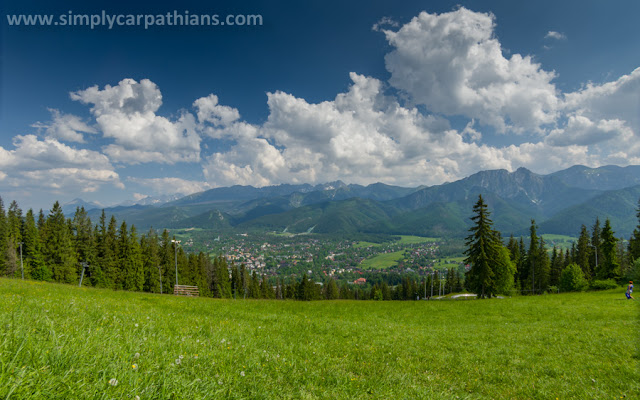 The Gubalowka mountain ridge is full of housing buildings - this is the highest settlement (1122 m a. s. l.) in Poland and it belongs administratively to Zakopane. The largest oject visible from afar is the Radio and TV Tower, nowadays also providing mobile phone coverage and satellite television. The funicular is the most often visited attraction. It was built in 1938 and modernized fifteen years ago. The summit can also be reached by numerous hiking trails leading to Gubalowka from different directions. 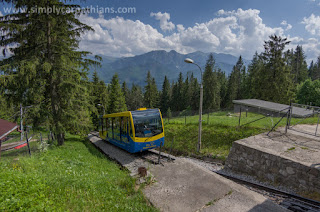 You have to go down a few dozen meters from the upper funicular station to see the full panorama of the Tatras. The view covers most of the Tatra Mountains - from the Belianske Tatras to the distant peaks of the Western Tatras. The most conspicuous is Giewont Mountain with its silhouette of sleeping knight. You can also recognize almost every building in Zakopane, the complex of ski jumps and many other objects. Unfortunately it is impossible to see Rysy (the highest mountain of Poland) and Gerlach (the highest peak in the Tatras) from Gubalowka.

One of the worth seeing objects is the monument called Polonia Restituta located near the upper station of the funicular. Two-meter bronze figure shows the resurgent Poland. On the left hand of the woman there is sitting an eagle with spread wings ready to fly. The sculpture was made by Stanislaw Kaniak for world exhibition Art and technology in contemporary life in Paris in 1937.

Another interesting object is a metal cross standing near the Radio and TV Tower. It was commissioned in 1873 by Titus Chałubiński in Kuznice (local ironworks). The cross was founder's public confession of faith and it also commemorates his reconciliation with the family.

Gubalowka is worth visiting at any time of the year because of the spectacular views. I recommend to explore the area in the morning hours to do it in peace and quiet.

Photographing the round-leaved sundew is not a quite easy thing. But don't be afraid, you do not have to be a professional with years of experience and very expensive equipment for macrophotography. The difficulties lie in the fact the majority of people simply do not notice it ;) 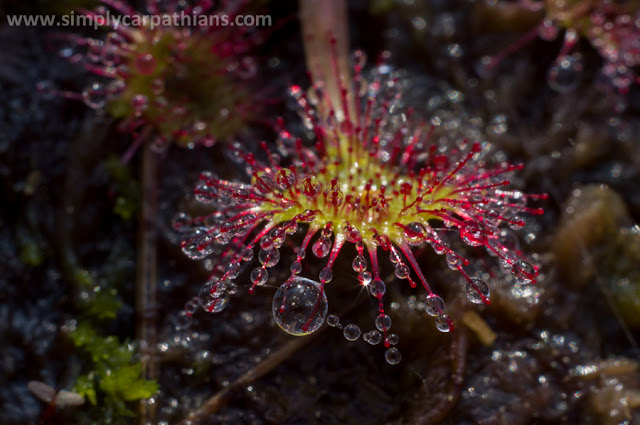 So firstly, you need to locate the sundew – its tiny leaves are almost whole green and it is hard to spot them among the bogs. I have spent more than an hour during a photographic tour on the wetlands before I found the first specimen and took a photograph of it. I must add that it wasn't my first search.

As for the shooting, should you choose the morning time when the light is not too sharp and there are still morning dew drops on the hairy leaves. Under a cloudy sky, you can make use of an artificial light source - a flash or headlamp. A plain white sheet of paper reflecting daylight may also be useful. Of course, interesting pictures can also be taken in the rain - the best is drizzle with tiny water droplets which gather on the leaves. Almost each leaf contains undigested remains of insects - sundew is real carnivorous plant!

You can tak macro photos by almost any type of camera - from small compact devices with often very good macro mode to SLR cameras with special lenses for macrophotography. Most of the following images were taken with SLR Pentax K-3 with the Soviet lens Helios 58mm type M42 attached to the camera with the appropriate adapters and rings for macrophotography.

Where to find the sundew? It can be often found in bogs, marshes and fens. The pictures where taken on the peat bog near Nowy Targ (Lesser Poland). Sundews grow there next to the observation platform, half a meter from the railings.


If you want to learn more about macrophotography and see those amazing plants – you are warmly welcome to our photo-tours and workshops. 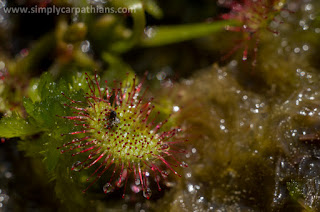 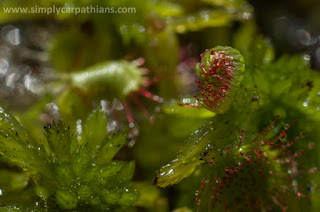 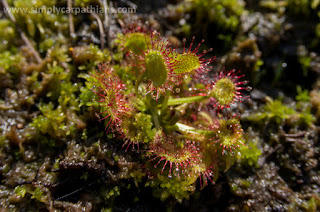 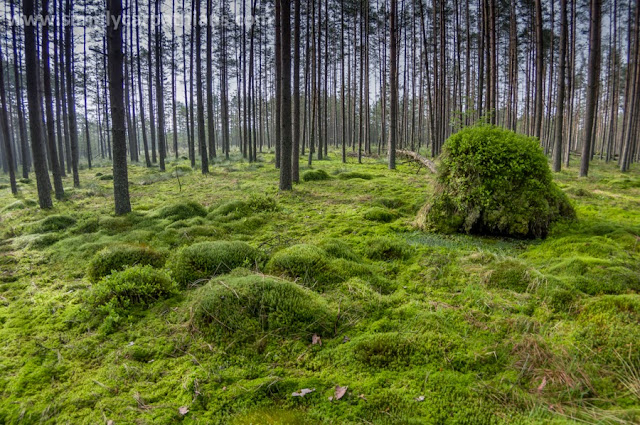 Recently we have been discovering the charms of picturesque place which is the Nature Reserve Bór na Czerwonem. It is located in Podhale, Lesser Poland. The place has the true recreational potential - Nordic walking and cross country trails are led here, it can also be the target of a bicycle tour or a stroll. Some come here at odd hours and roam around with a camera ;) However, the nature reserve is primarily the place where extremely interesting species of plants are protected. 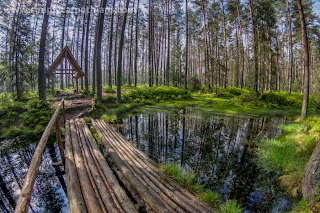 The area has been protected since 1925 but it was given the status of a nature reserve in 1956. Bór na Czerwonem is peatbog reserve, in which the raised bogs ecosystem (supplied with rainwater) and surrounding it humid forest communities are protected. This is an example of peatlands typical for Orava-Nowy Targ region.


The name (czerwone = red) the reserve owes to algae, which in autumn assume a red color. But we can see here many more interesting species typical for the wetlands such as sphagnum moss, Cranberry, cotton-grass, different types of pine or fascinating common sundew. If these names do not say anything to you - just come here and see for yourself what a beautiful landscape they form :) 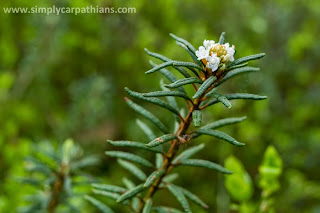 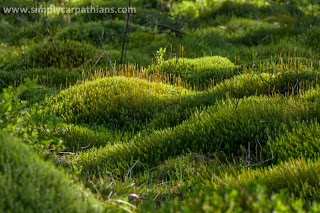 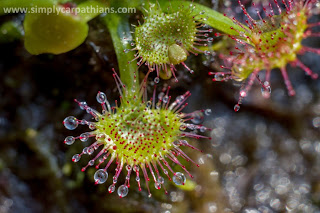 Every person tastes the world in a different way, notices various details... We would like to share our observations, experiences, knowledge and feelings about The Carpathians - the region we live in and discover each day.

Welcome on our blog:)

We invite you to comment, suggest, ask questions, agree or disagree with us...
We also run a tourist company. 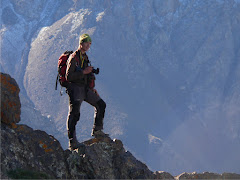 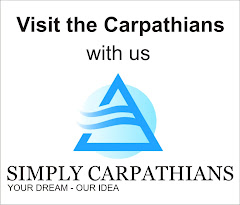